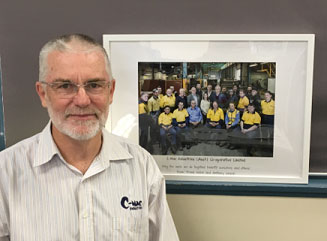 To identify training and the support required for staff to move into employee ownership through the introduction of the “Employee Share Ownership Plan” (ESOP), C-Mac needed to understand the current situation. Consultants were engaged to undertake a survey and make recommendations. The report was titled:

Below is the Introduction from the report:

The purpose of this report is to support the vision of the owners of C-Mac to transition ownership of the firm to its employees over four years. With its move to make shares in the business available to its employees, C-Mac’s owners and its leadership team have shown that they are forward-thinking and prepared to embrace change.

Importantly, whilst C-Mac has received national recognition for its forward-thinking through its being awarded the ESOP of the Year, 2011 the prospects for its vision of ownership transition are at risk if the firm relies solely on the mechanism of the ESOP.

Equally, there is the potential for C-Mac to be a pathfinder for this type of transition both in Western Sydney and Australia if it gets it right.

This report lays the foundation for ensuring that all the firms’ objectives for employee ownership are achieved and the owners’ vision realized. In doing so, this report has three aims:

High-performance firms source ongoing specialist support in the transition to and management of employee ownership.

Because of the long history of employee ownership overseas, the relative newness of the concept in Australia, and the scarcity of comparable data from Australian firms, our benchmark data are drawn from high-performing employee-owned firms which we have measured in Spain and Italy.

In common with C-Mac, these businesses are small-medium enterprises. These firms have continued to perform well even in the face of the global financial crisis and the ongoing ………..

If you want to get an understanding of Australian culture and employee ownership in the workplace; the book “Swapping Desks – Pioneering Business Succession via employee ownership” explains a family business succession to the employees and the struggles he faced.